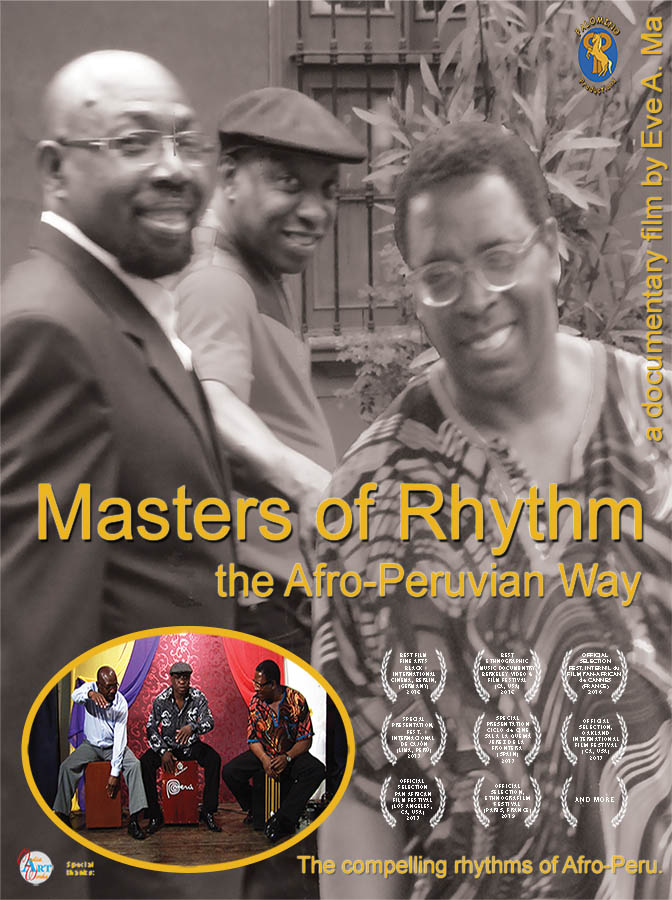 Masters of Rhythm: the Afro-Peruvian Way

Masters of Rhythm, of filmmaker Eve A. Ma, has screened in five countries on three continents, and won awards in the USA and Germany. A natural outgrowth of my earlier documentary about Afro-Peruvians, it features percussionists Lalo Izquierdo, Cotito and Huevito. Performancs include two original music compositions and a dance form called Afro-Peruvian zapateo, with fancy footwork similar to tap dance.

When you purchase this 30 minute documentary, you also get several interesting extras. In one, for example, Juan de Dios Soto cooks a special Afro-Peruvian dish called carapulcra. In another, star Lalo Izquierdo demonstrates rhythms from the days of slavery through an Afro-Peruvian form of "talking drums." 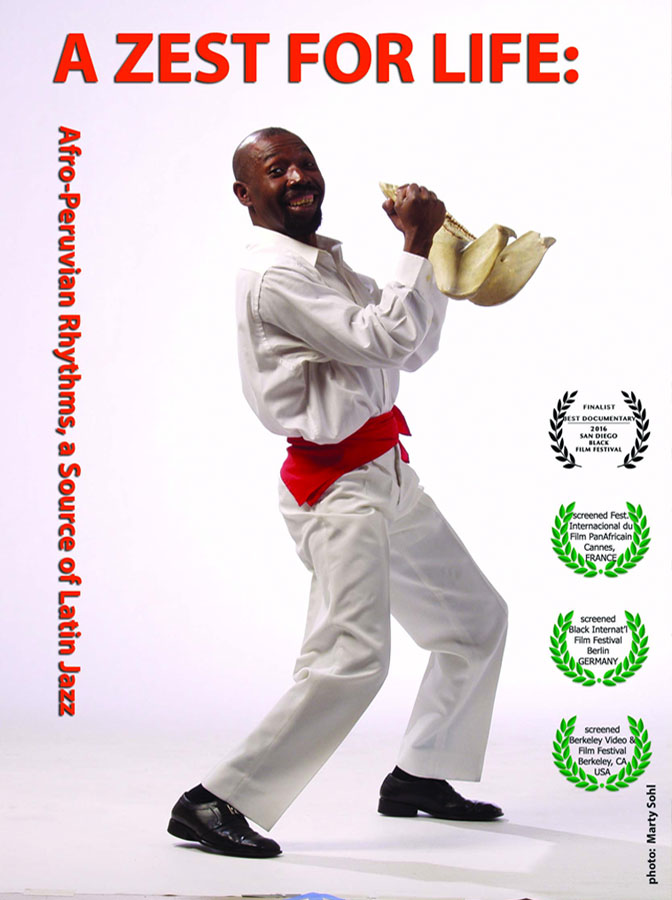 A Zest for Life: Afro-Peruvian Rhythms, a Source of Latin Jazz

"...Lalo Izquierdo...is so compelling, you just might jump up and join in..." (Deidre Towers, former curator, Dance on Camera Festival)

The first documentary I made about Afro-Peruvians, this focuses on the dance, and on the history of the Afro-Peruvian community. One hour long, it screened in four festivals and was runner-up for the prize of Best Documentary in the San Diego Black Film Festival. It has also been broadcast over individual PBS stations.

A Zest for Life stars Lalo Izquierdo, one of the three principals in Masters of Rhythm; in fact, it was Izquierdo's talent, chrisma, and knoweldge of the history and culture of his community which led me to make additional trips to Peru to film Masters of Rhythm. In A Zest for Life, Izquierdo is ably complimented by singer-songwriter Jorge Luis Jasso, by bassist Vladimir Vukanovich, by the performing group de Rompe y Raja, and others.

CAJÓN IS KING: An Introduction to Afro-Peruvian Music (CD)

"...a treasure chest of songs....performed by the great torch-bearers of the musical culture...." (Raúl de Gama for World Music Report)

The music album Cajón Is King compliments the two documentaries about Afro-Peruvian music, dance, and culture. With 12 tracks, there is a full one hour of music - but this is not your standard music album.

OR purchase on CD with PayPal: 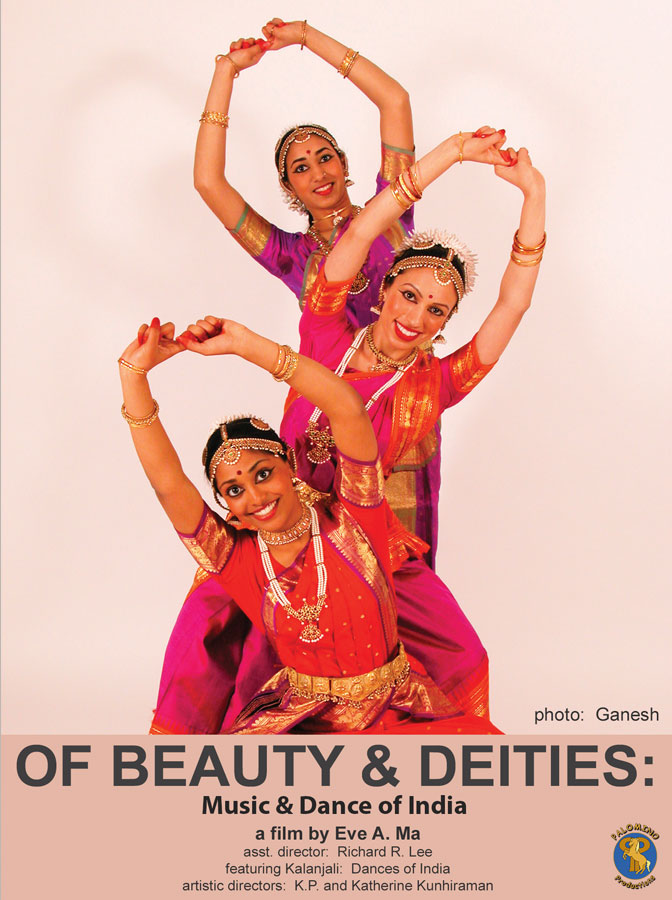 Focused on southern Indian classical bharatanatyam dance and music, this hour-long documentary consists mostly of performance and interviews. The performers come from a group called Kalanjali: Dances of India that maintains performers in Chennai, India, and a dance academy in Berkeley, CA, USA.

Our documentary was filmed in the San Francisco Bay Area. The group performers come from the dance academy and are mostly young women from the Indian diaspora. The solo dancer, K.P. Yeshoda, as well as the musicians, come from India but traveled to California to join us in the studio.

Kalanjali's directors are the primary interview subjects: K.P. Kunhiraman (now deceased), a master of both bharatanatyam and kathakali, along with his wife, Katherine Kunhiraman, who has specialized in bharatanatyam. Both trained in the Kalakshetra Academy in Chennai. 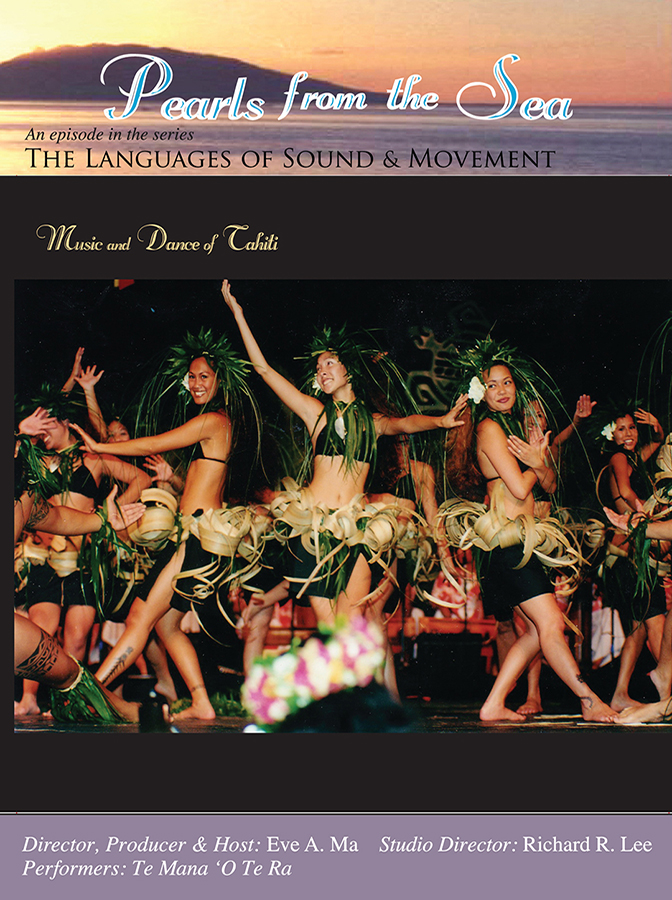 PEARLS FROM THE SEA: Music & Dance of Tahiti

This hour-long documentary is constructed around the lively, fast-paced performances of the dancers of the California-based group, Te Mana 'O Te Ra. The dancers and musicians of Te Mana 'O Te Ra have performed throughout the United States as well as in Hawai'i and Tahiti.

Musical director Rey Aguilar leads a group whose instruments are a wide variety of drums along with a mandolin. The dancers, who make their own costumes by hand, are directed by his wife, Lisa Aguilar. In addition to Te Mana 'O Te Ra, the documentary features a section of performance by the Tahitian group from Hawai'i's Polynesian Cultural Center - not to be missed!

Complementing the dance and music, we interview the Aguilars and use a narration to recount a brief history of Tahiti, and its music and dance. The narration is illustrated by photographs, period lithographs, and the like. 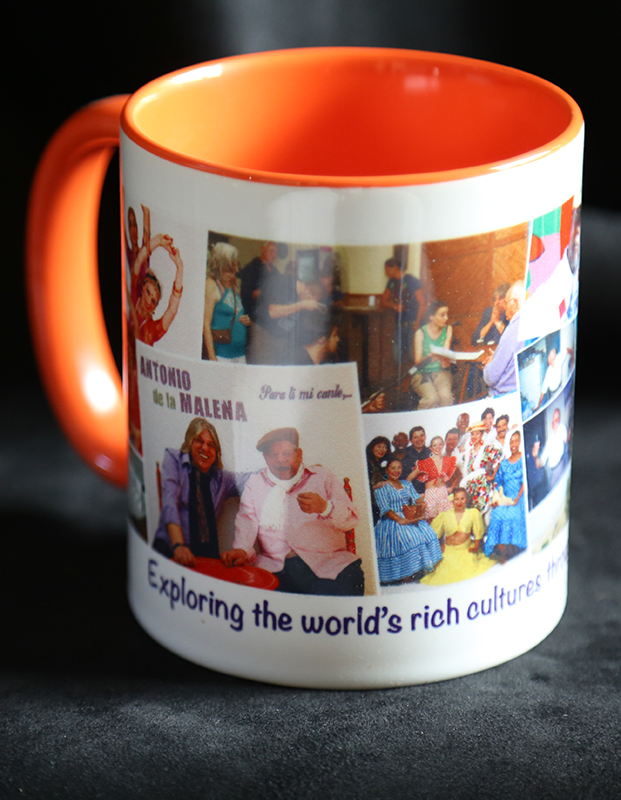 Our special, one-of-a-kind, Palomino Productions' Diversity cup! Bright, colorful, with scenes from our films, this cup shows that you value and enjoy ethnic and cultural diversity, and that you also love movies. Who doesn't? 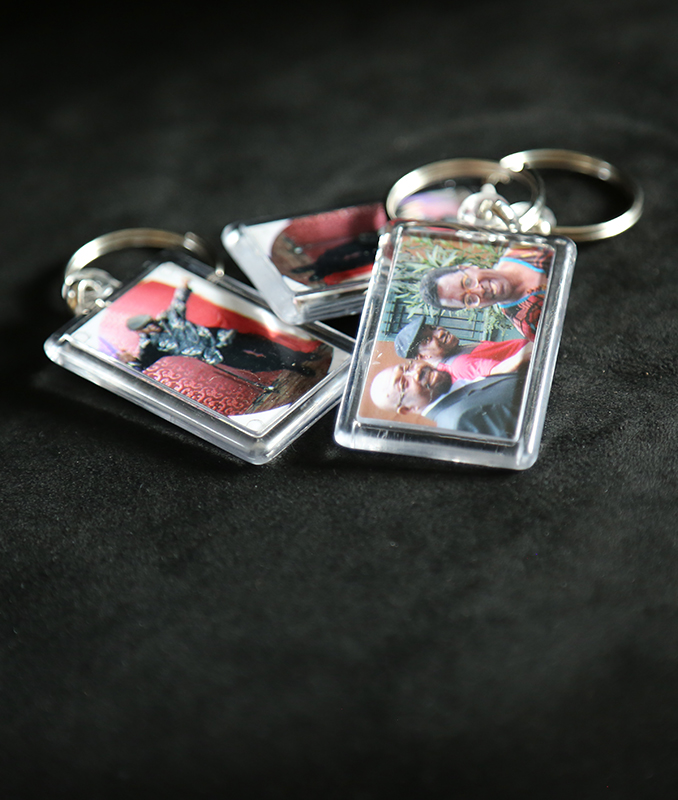 Like our stars? Here are two-sided key chains: the three masters are on one side, with Huevito dancing zapateo on the other.